PCX seat has a hump separating driver and passenger sections. It's probably meant to be used as a back support for driver, but the way it's designed, it makes it impossible to scoot back on the seat. This is uncomfortable for taller riders, since you cannot stretch your legs. 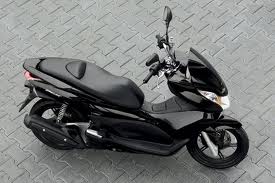 I have removed the seat hump shortly after I got this scooter, but it left a hard spot underneath, so it's still not comfortable to sit where hump used to be. I tried putting an Airhawk set cushion over it, but didn't like the way it feels.

I have checked the Clubpcx.com and Hondapcx.org forums - it appears that my issue is pretty much a main complaint that owners have about their PCX. I've read about the ways they solved it, but it seemed like too much work for me :)

At this point, it looked like replacing a seat seemed like an only option. There were no U.S. stores selling an alternative seat, so I expanded my search and found a site in Germany that offers an altermative (faddybike-deutschland.de). I ordered a seat from them, waited for a week and asked to see what the order status is. They said that seat is out of stock (even though their website didn't say so). After waiting for another month, I asked if they can send me another seat from their inventory. They agreed, but one day later said that customs won't let it thru, because it has word "Honda" on the back (!). They refunded the money.

So, I was back to square one. Another shop was mentioned in the forums: PowerByPcx.com. Their seat selection was wider and prices lower. The only caveat was that site was only in French. I struggled my way thru it with Google Translate and ordered the seat. 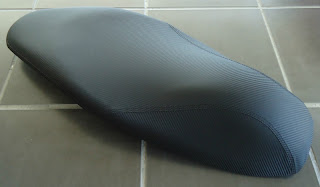 The seat appears to be a revamped version of the original Honda one - if you look underneath, you can still see the holes where the seat hump used to be.

I am planning to put it on as soon as I figure out what kind of wrench I need to use to remove the original one :)

Update - I got the new seat installed, it's great! The quality of PCX ride went up a notch!
Posted by Scooters2Com at 10:28 AM 14 comments:

In Russia there is a saying: "A smart man will yield to a streetcar - and not because he is polite". Same thing applies to scooters/moped - even though we have same rights as cars on the road, in every collision with a car, we lose.

Car drivers talk on the phones, listen to radio, talk to passengers and drink their Big Gulps. Their attention is scattered and their reaction time is delayed by the distractions.

Keeping this in mind, here are some thoughts on how to ride safer on a scooter:

After I had my Vespa incident, I've made a list of rules to follow to ensure safety in the future. Here they are:

I've made this list in 2002 and I've been following most of these rules. No new accidents since then *knock on wood!*

Letter from a rider to a driver

Scooter Riders Sitting At Intersections
Posted by Scooters2Com at 10:51 AM 1 comment:

Honda PCX 125 is the latest scooter I bought. It's beautiful, nimble, fast and quiet - yet something doesn't quite feel right about it.

First, there is the seat. It has a hump which is supposed to separate driver and passenger sections. However, the hump is too close, so it's impossible so sit back when you need to stretch your legs. I have removed the hump, now there are hard bumps in the place where it used to be - so sitting back is still not comfortable. I have ordered a replacement seat from an online store in Germany on April, 25 - still waiting for it to arrive.

Then, there is a matter of "sweet spot". My definition of scooter sweet spot is this - it's the speed that makes you smile as soon as you reach it. For a moped or 50cc scoot, this is 25-30mph. For my Vino 125 it's about 40-45mph. For the Honda PCX, I can't quite feel the spot. It's kind of 'meh' when going slower tan 30mph. It gets a bit scary at 60mph due to it being lightweight. I guess 50mph is where PCX likes to be - but it's doesn't give me that "smile ear to ear" feeling.

Seating position causes my back to start hurting quickly - but this could be resolved once I get the seat replaced.

Suspension is odd too - when you are on a good road, it's like floating on air - very smooth and quiet. On the bad road you start feeling every bump and the more you ride, then more they add up. I rode for a few hours recently and at the end of the ride I was scowling and growling at each bump that I encountered. I did not have this issue on Aprilia Scarabeo - though it did have bigger wheels (16" vs 14"). I checked the forums and they said that PCX suspension cannot be adjusted - the only option is replacing the shocks.

When you get to 60mph, it feels like PCX is braking to avoid going faster - this is especially noticeable when going downhill. It's probably not dangerous, but I don't like how it feels, so I try to avoid opening throttle all the way. My others scooters (Aprilia, Vespa, Yamaha) didn't do that. 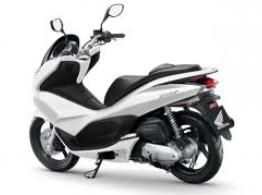 Update - now that I got the seat hump sorted out, I think I've finally found the 'sweet spot' - it's between 50mph and 55mph.
Posted by Scooters2Com at 2:24 PM 1 comment:

In the fall of 2003 I was driving around and saw a little Vino scooter with a "for sale" sign. By that time I already had Aprilia 150, so I thought that I have left the 50cc world behind - however I never pass along a test ride, so I stopped and talked to the owner.

He was open to the idea and I rode Vino around the block. The feeling was incredible! There is something about a 50cc bike that no bigger scooter can give you! Perhaps it's the fact that on a small scoot you have fun as soon as you twist the throttle. Plus, the wind in your hair is so awesome... yeah, yeah, I know - you should always wear a helmet.. but whatever :)

Anyway, it was love at first sight and bought the Vino for $1500. From that point until spring of 2012 is became my fun and reliable second bike. Every time Aprilia wouldn't start in the spring, Vino was purring like a kitten. Each time Scarabeo in the shop, Vino ensured that I can keep two-wheeling.

Eventually I realized that I am enjoying Vino more than my 'big bike'. However, riding Vino meant that I should stick to secondary roads/subdivisions - which meant that I would have to get up earlier to get to work... and I hate the idea of getting up early. So, even though I liked Vino more, I rode it less.

Earlier this year I saw a Vino 125 for sale at CraigsList. An idea of upgrading my Vino 50 came to my mind... I contacted the owner, drove there and test rode it... the bike was awesome! So, I bought it and eventually sold the Vino 50.

My thinking was that Vino 125 could be fun riding thru backroads, while capable of getting on main road, if needed. It's true for the most part, but still, when you riding the roads with speed limit of 30mph or less, nothing beats a 50cc for pure enjoyment!

It looks like Yamaha has Vino Classic 50cc back on their 2013 lineup, so you never know...

Posted by Scooters2Com at 11:42 AM No comments:

In the spring of 2003, few months after my Vespa was gone, I felt the Call of the Road again and started looking for another scooter. There was a local store which sold BMW motorcycles and Aprilia scooters (I know, it's a strange combination). I test rode Aprilia Scarabeo 150 and was amazed by how smooth and comfortable the ride was.

The bike was 1 year old and I got a good deal on it - especially because it included after market top case and side boxes. (The incredible storage capacity led to my bike being used for storing helmets and stuff by my trunk-less friends:).

Scarabeo was heavier than Vespa, so it took some getting used to - for example it couldn't turn on a dime, so I actually laid it down twice while trying to turn in parking lots. Side boxes also meant that I couldn't squeeze into narrow passages as well I liked, so some scratches were earned that way too.

Overall, things were going great until the shop I bought it from decided to become "BMW exclusive" and refused to work on Aprilias. My Scarabeo became orphaned and next time I needed service, I went to the local "any scooter accepted" shop. That was not a pleasant experience - the bike was there for 2 months and I was experiencing an "Aprilia withdrawal" syndrome. Thankfully, I also had a Vino 50cc scoot as a backup, so I could keep riding.

My Aprilia has seen many years of commuting, rides, rallies and even scooter jousting:

Being lazy, I neglected the winterizing tips - for example I never disconnected battery when storing Scarabeo for a winter. As a result, every spring it was an adventure getting it started. Sometimes I was able to get it going by jump starting from my car, but every other year a new battery was due.

In the spring of 2012, I jump started Aprilia, rode for an hour, tried to start it again.. it wouldn't. I took it to the shop, they called me back a week later and said that it's ready. I came to pick it up, rode few miles toward home and engine died. I called the shop and they said "if you can 'limp' it back, we will look at it".

So I started back - it died 9 more times on the way. When I came in, mechanic doubted me and went for a test ride himself. He came back 20 minutes, looking embarassed and said that it died on him 3 times too :)

A week later they called me again and said that it's working - but they don't know why. This was the breaking point for me - if the service people don't know what's going on with the bike, how can I rely on it now? So, I started searching for a replacement and eventually got a Honda PCX 125.

However, the memories of Aprilia remain - I miss it and I even thought of calling the Honda dealer back to see if my Scarabeo is still sitting in the storage somewhere... 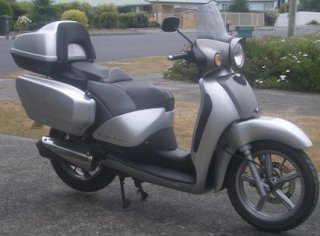